A typical day in the life of triathlete/mom/wife/teacher Amy Rice by By Carolyn Thornton – Journal Sports Writer, The Providence Journal, Saturday, 05/31/2003 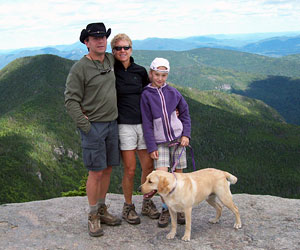 SOUTH  KINGSTOWN – A typical day in the life of triathlete/mom/wife/teacher Amy Rice:

*5:15 ” She’s out the door to meet up with neighbor Mary Camire for aÂ  training run.

*6:30 ” Rice is back home, grabbing a quick kiss from husband Steve before he heads to his job at Superior Electric in Warwick.

Rice spends the next hour or so showering, having breakfast with Kirstyn, packing lunches and taking care of golden retrievers Boz and Nala.

*7:45 ” Rice piles Kirstyn and all of her training equipment into theÂ  car for the eight-mile drive to the South County Montessori SchoolÂ  in NorthÂ  Kingstown , where mother teachesÂ  and daughter attends preschool classes.

* 5 o’clock ” She meets up again with Kirstyn who has been in the school’s extended daycare, and they head home. The next few hours are spent playing withÂ  Kirstyn, letting the dogs out, paying bills, doing housework and making dinner.

Once Steve is home from work and Kirstyn is in bed, Rice goes to the South County YMCA  for a swimming workout on Tuesday and Thursday nights at 8. She may not get to eat dinner until 10.

Except for an occasional day off, that’s Rice’s routine Monday through Friday.  On Saturdays, the South Kingstown resident, 40, runs 15 to 18 miles  with Camire at 6 a.m. and does another  2 hours on her bike later in the day.

On Sundays, she spends three to four hours in the morning biking 40 to  70 miles and goes to the Y for a 1- 2-hour swim in the afternoon.

“Yeah, it doesn’t end on the weekends,” she laughs. “Isn’t it crazy? Why would you do it? Because you love it. I would never do this unless I liked it.” Rice’s juggling act certainly has her husband baffled. “I give her a lot of credit, I really do,” he said. “I remember how I used to train. If you want to be good, it’s a big-time commitment, trying to be proficient in three different sports. All I had to juggle was triathlon and work. I can’t understand sometimes how she does it. She does everything. She’s like a superwoman.”

The answer, says Rice, is organization. “I’ve kind of always been that way,” she said. “Teaching makes you be that way with 24 3-, 4- and 5-year-olds.” Rice also has great support from her husband. Once an avid triathlete himself  ” the couple met at a race 15 years ago ” he has since retired from the sport, partly because of work, but also because he wants to be available  to watch their daughter so that Amy can train.

“I tell everybody that’s why I don’t have to race anymore; I just live  vicariously through her race experiences now. It’s just fun to go watch her race. It really is.” In fact, having her family cheering her on is a prerequisite, says Rice. “They’re my greatest fans,”  she says. “I would not race without them. That’s just the way it  is. That’s the way it’s always been.

“It’s  a great family thing. Your kids come, they hang out and go to beaches and lakes. The race itself is so short, then you have all this time  to spend with your family. And you’re exposing them to a healthy lifestyle.”

More than just a pastime, triathlons are a way of life for Rice, really the only life she has known for the last 18 years.

Always athletic, she grew up in Harrison , N.Y. , swimming, showing horses, racing on her father’s sailboats or playing field hockey, basketball and lacrosse. When Rice arrived at the University of Rhode Island ,Â  she put sports aside to concentrate on school, but soon realized that she needed an outlet. She hooked up with a crowd that was getting into triathlons, borrowed her father’s 10-speed bike and the rest is history. 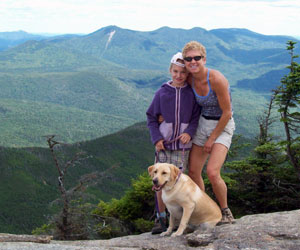 With about 100 victories under her belt, Rice has consistently placed among the top three women, often among the top 10 overall, beating many of  the men. She has not lost a race in the last two years and is currently riding a 20-race winning streak. SheÂ  is most proud of her victoryÂ  which she calls the “pinnacle of  my career” ” at the ITU World Championships in Mexico last November. Enduring 98-degree temperatures and 75-percent humidity, she finished sixth overall in a field of more than 1,000 and beat out 160 women in  her age group.

What made the win particularly special was that she dedicated the race to her father, who had lost an eight-month battle with cancer a month earlier.  “I trained so hard,” said Rice. “When I found out I won,  I cried. I felt my father’s spirit with me the whole time on the bike. It was the hottest [weather] I’ve ever raced in. I had come off such a great season, winning the world qualifier and then going there and coming out being sixth in the world. It was a really great, uplifting  and emotional thing to do.” Rice  earned All-America honors last year and was recognized as the top-ranked  woman in the 40-44-year-old age group by the United States Triathlon  Federation.

Things have changed since the arrival of her daughter. Instead of training  to Ironman and Tour de France videos, Rice watches rerun after rerun of the Junglebook, Peter Pan and Mary Poppins. Rice cherishes every  moment she gets to spend with Kirstyn and tries to plan her workouts  so they don’t cut into their time together, but she says, mothers can’t  feel guilty about pursuing something they enjoy. “I think I’m a better mom for what I do because I’m happier with myselfÂ  and I feel healthier, so I think I enjoy life more,” said Rice. “I think even as a parent, you need time for yourself.” Not  to mention that Rice feels her performances have actually improved sinceÂ  the birth of her daughter. With less time to train, she must focus on quality over quantity with her workouts.

Training with Camire and Eric Winn, another local triathlete, for the last few  years also has improved Rice’s running immensely, which has allowed her to better fend off competitors on the last leg of a race. “This  is fun,” she said. “This is rewarding being healthy and inÂ  the best shape of your life at 40 and being able to beat people that  are so much younger than you.”

Rice’s busy racing season is about to get under way. She plans to do about  a dozen races, including a world qualifier in Wisconsin in September  and the nationals in Louisiana the following month. She’d love to be able to defend her world title in New Zealand in December  and being named Masters Triathlete of the Year would be the ultimate accomplishment.

But  Rice will tell you, for all the medals and the honors she may garner, nothing quite compares to hearing that little voice perched atop her  husband’s shoulders as she rides by, saying: “Go Momma! Momma’s the World Champion!”

Although Rice races for and is partially sponsored by a chain of triathlon stores called Fast Splits MultiSport, she must still raise a considerable amount of money to pay her way to many of the races.