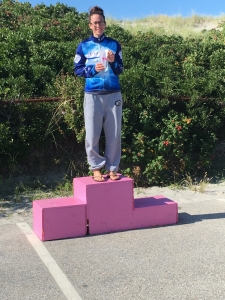 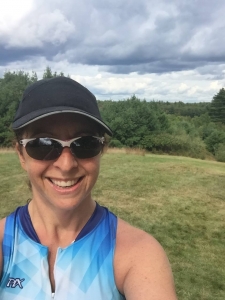 What a fantastic autumn weekend full of racing.  Many athletes towed the line this weekend for some late season racing.  Some were racing for the first time on longer courses, some competed both days, others were tuning up for world competition, and the seasoned athletes raced because that’s what they love to do.  The smiling faces tell you more then my race report can convey.  Once again they all amaze me and I am honored to coach them.

On Saturday Leslie Battle competed in the Hyannis Sprint II triathlon.  Smashing the Athena field by 12 minutes she took top honors in a time of 1:10:20.  Sunday proved to be a very busy race day throughout New England.  In Rhode Island at the TriNewPort Triathlon top honors went to all athletes.  Jillian Schneider did her last race before flying to the ITU world championships.  She took top honors in the sprint race for the females in a time of 1:09:32.  Toby Bennett continued his streak on the podium winning the 40-44 age group in a time of 1:09:38.  Leslie Battle came on strong after her victory the day before and won the 45-49 division in the Olympic race, with a time of 2:34:46.  On the other side of the bay, John Goodwin captured first place in the 60-64 age group at FirmMan sprint triathlon.  In the half Ironman, Ben Milligan competed in his first long distance race and had a fantastic day finishing in a time of 5:47:18.

Just a bit up the road in South Berwick Maine Denise Cugini Champney and Martha Sylvestre were having their own fun at The Pumpkinman Triathlon Festival.  Denise set a PR by 30 minutes!!!! finishing in 6:15:00 and Martha completed her first 70.3.  Although she was convinced she was going to die she actually enjoyed it and completed her race in 6:56:47!

Travel a little farther and the racing continued.  At the 70.3 in LakePlacid George Butts and Bill Almond, both had great races.  George finished in 6:49:27 and Bill not to be deterred by a sore calf muscle completed his race in 7:32:03.

Congratulations to all!, you make me very proud!